it’s been exactly two months since last update and many might be wondering what I’ve been up to. Unfortunately this is not all the exciting post I’d like to be writing, but a good one to write in my humble opinion for keeping moving forward after bad times.

First of all I’d like to mention something I forgot in my last update, as you know I left Rare in December and got back to Barcelona to get better and chase other opportunities probably giving freelance a try. In order to kinda clean and start over I also left the project I was working on with some buddies, ‘Isis’, but I’d like to show the last few pieces of work I was producing thought they are not finished, and will probably never be.

The last couple of years since the Massive Black workshop in 2011 have been pretty intense with a lot of things going on and a lot of hard work, so after the last workshop in LA I thought I was ready to keep pushing, improve get new jobs and all that but in reality it’s been 2 months mostly charging batteries. I guess I burned up myself, I even made a pretty hardcore schedule called “10 daily goals” but didn’t help.

First thing to care about was health because I started feeling quite weak. I started working out every second day and it’s been 6 weeks already. I also put down the amount of caffeine (last year had too many energy drinks and that’s not good at all) and sweets. I feel much better now but just yesterday coincidence or not was my most productive day in a while having 3 coffees and a good amount of chocolate. I guess the perfect balance of health and extreme productivity is a utopia for me.

In all this time another thing I’ve been skipping was watching movies so early this year I ordered quite a few to catch up, after all, it’s another part of the industry I’d like to work at. It’s been good to feed myself with more stories, inspiration, visuals and others. I also finally watched game of thrones! I was happy waiting till that day in the future when the whole series were over but with the new season coming out soon and my fear for spoilers I got the 3 seasons pack and Oh Lord such a good show. All of this have been motivating me to ellaborate a bit more the story for my IP ‘Space Lotus’, can’t wait to start defining more the characters and their connections and all the locations.

It’s been very interesting to watch different genres to open my mind a bit more, but also got to check again some japanese animation and get a little bit of nostalgia because it’s the stuff I grew up with. After watching movies like ‘A letter to Momo’ or ‘Summer wars’, bringing me memories from my trips to Japan years ago I painted these studies and soon should be able to finish a similar painting I started after them to apply the studies. 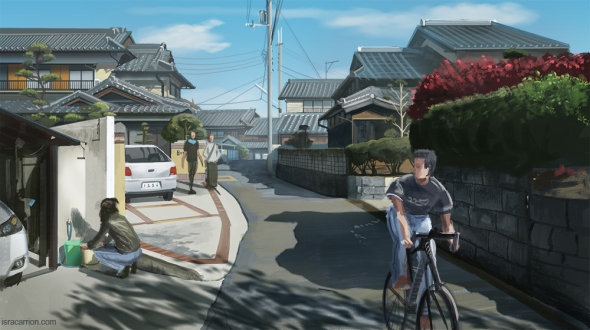 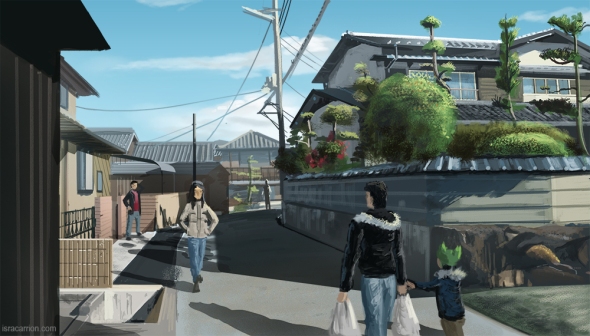 Nostalgia is a powerful but dangerous feeling. I’ve been trying to remove the dust on my japanese because I might apply to some japanese companies in the future.

Speaking of missing things, probably the thing I missed the most in the UK was my library, I’ve been adding a few more books and organizing it, its very likely that, unless I find a good studio offer I’ll be freelancing for a while, and my library is an important part of my workflow for inspiration and references.

Blocks are never good, and I know some artists who never suffered one, which is great, but I wanted to write this here for those who might be going through one, it’s alright, you will get out of it with the right attitude and not giving up, might take longer or shorter but just find the right motivation, inspiration or rest required to put your batteries to the max again and recover the eye of the tiger (yeah the whole Rocky collection pumped me up quite a bit too :D). 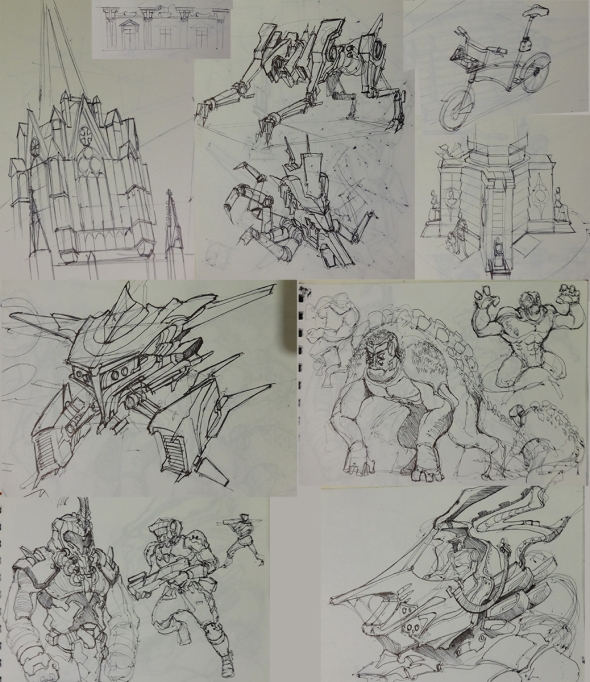 He me if I’d like to join again the life drawing sessions with model I used to go a year ago and didn’t need more than a second to say yes. I was missing it, more than because I learn or practice I just have fun drawing the human body from life, it’s so relaxing. Here’s the result of the 5 session’s done so far. We draw poses in 5 or 10 minutes after a few one minute gestures.

Another habit I somehow managed to keep going is the daily spitpaints. Though I’m not very proud of them, here’s a compilation of all done since last compilation.

As concept artist I like working on different subject matter but it’s hard to find time to paint a bit of everything. Creatures/characters is one of the subjects I didn’t work on much recently so here are a few of them. 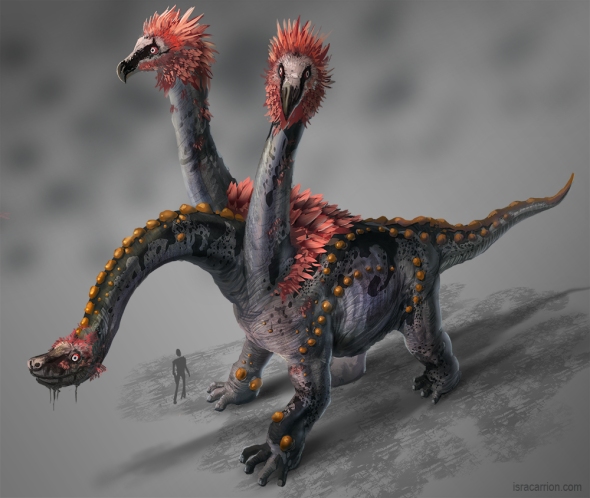 My friend Jonathan’s been working on his own personal IP ‘Raijin’ and I asked him if I could design an environment for it. I started it and here are some early sketches in perspective but had to put it in stand by for a bit, going to get back to it soon tho.

I had a conversation with him about mechs and how important the joints are. Inspired by an exercise recommended by John Park on his workshop at Concept Design Academy I grabbed a bunch of friends and we’ve been doing a weekly session of joint designs. These are mostly from imagination and a few studies, need to study more to make more interesting and functional designs but the practice’s been fun and useful so far. 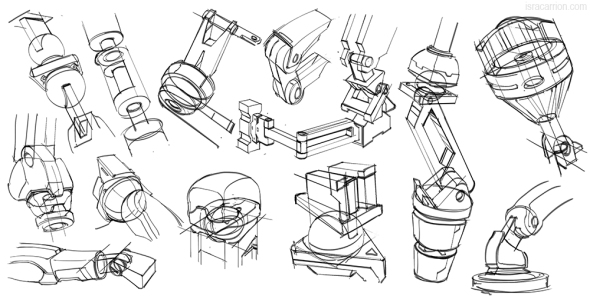 And here are a couple more perspective drawings tho not related to that. The ‘How to draw’ book by Scott Robertson made me want to get back to this sort of drawings. 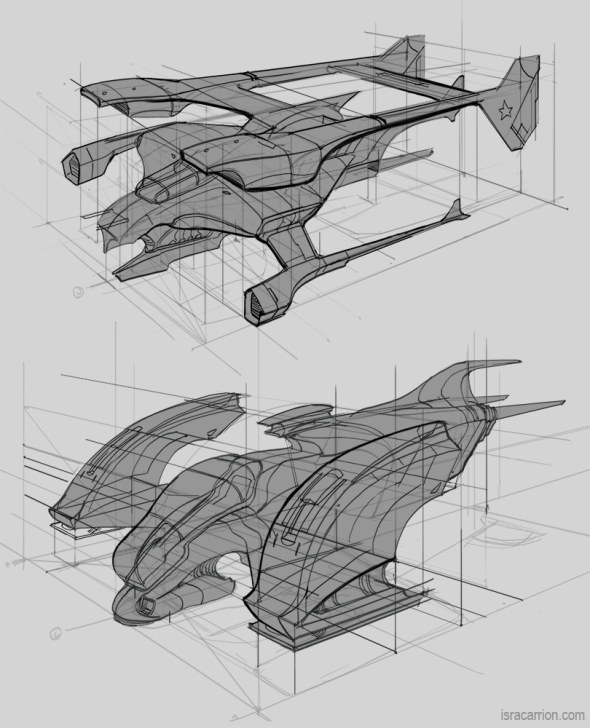 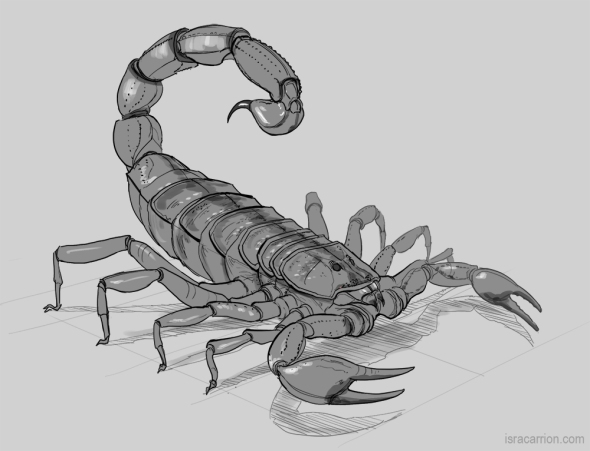 The scorpion was a study for another design I have work in progress but hopefully will continue at some point.

In September last year I designed a big dark fantasy statue for a book project called Substrata. The book’s been finally announced and will be published later this year, it’s very exciting because the book contains a lot of great artworks. I already pre-ordered my copy of such an inspiring book, take a look

I’d like to mention is in September I’m going to the Trojan Horse was a Unicorn workshop in Portugal. I’m really excited about it from my experience at the workshops, because the one last year seemed to be awesome and because the list of people going keep growing and sounds great so far.

Can’t wait to get inspired by the instructors, see some friends and any of you there, it’s going to be a lot of fun!

I think that’s all for now, this update is very important because puts end to two months I’d probably like to forget, but since I can’t I’ll just take the very few good things they had and will keep moving forward. I’m going to be more active again online, and will check what everyone’s been up to too, been a  bit disconnected.

The place I keep updated the most is my facebook page and then this blog, but I’ll keep updating the other places as well as much as possible, stay tuned, hope I can keep feeding you with more and more artworks from now 🙂 Oh and by the way, many people keep asking why I don’t stream anymore, well my computer is very limited and when I stream it uses the max of the specs so I’m trying to take care of this laptop to not have to update the machine for now.

Thanks for reading and let’s keep rocking! :